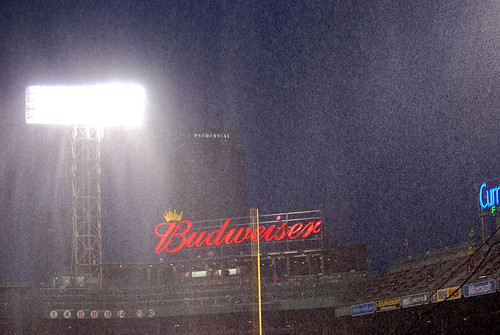 Pretty sure you didn’t see that coming. On a cool and rainy night at Fenway, the Red Sox pounded out another ten hits on Thursday (for an American League-best 22nd time) to beat the Rangers 6-2 and sweep a very hot club right out of Boston—and right after Texas arrived riding a 10-game win streak.

Texas has been a tough opponent for Boston. Since 2000, no Major League club has a better OPS against the Red Sox than the Rangers (.823). Even with the just-completed three game Sox sweep, the Rangers are 32-24 in that time for a .571 win percentage, the best such win percentage facing Boston of all American League opponents.

“The sweep is surprising,” Rangers shortstop Elvis Andrus said after the game. “But that’s the beauty of baseball, I guess. You cannot take any team for granted. Even when you feel you’re playing at your best, stuff like this can happen.”

The Sox outscored the Rangers 26-12 in this series, but the real story of Thursday’s win was the pitching.

Feisty Drew Pomeranz, fresh off an on-screen argument with Manager John Farrell after his last outing, took the mound after a 28-minute rain delay, and was solid and in command. Pomeranz allowed one base runner through three innings before giving up a 370-foot home run to Andrus. Unshaken, he got the rest of the fourth and fifth innings unscathed.

In all, Pomeranz allowed two runs on four hits with one walk over 6.0 IP. More impressively, he struck out 11 Rangers, tying his strikeout career high of last August 25. Pomeranz’ fourth inning strikeout of Mike Napoli was the 500th of Drew’s career. In all, Napoli would strikeout four time for his 2nd golden sombrero of the season.

Kimbrel’s ninth inning of work, a non-save opportunity, included a rare four strikeouts after Nomar Mazara struck out but made it to first base on what was ruled a wild pitch. It was just the second ever four-strikeout inning of work by a Red Sox pitcher. The first was Tim Wakefield‘s ninth inning against the Royals on August 10, 1999.

When all was said and done, Red Sox pitching had struck out 20 Rangers to tie a major league record for a nine inning game. Boston has twice previously reached the 20 strikeout plateau on April 29, 1986 (against the Mariners) and on September 18, 1996 (against the Tigers). The other clubs to reach 20 total opponent strikeouts are the Nationals (2016), Angels (2012), and Cubs (1998).